A heavier-duty hammer than your typical household hammer, a framing hammer is distinctly used for framing houses that are wooden. Typically, the claw of the hammer is a straight claw, and they weigh a bit more than regular hammers – especially those that have heads that are steel. Heads that are in the titanium family are about half of the weight, but still, get the job done. If you’re in the market for a framing hammer, check out our small buying guide, along with some reputable reviews and breakdowns of each hammer. Some groups have managed to use air hammers, but I think that’s not so handy.

A name that’s a mouthful, this inexpensive framing hammer is sleek in design and packs a powerful punch (or hammer). There are numerous features including:

You won’t have to worry about ahead that’s detachable that could potentially harm you, as the Stanley provides a one-piece, fully-steel constructed framing hammer that weighs a full 16-ounces. Because of the weight of the rip claw, there are a ton of features that are beneficial to the user, including the torsion control grip technology that aids in assisting your elbows and wrists. Those with carpal tunnel will enjoy this hammer. The AntiVibe technology reduces the amount of vibration and shock during the impact of the hammer with the material, creating a safer environment for the user. Lastly, the precision balance ensures that the positioning and use of the framing hammer will always be optimal. 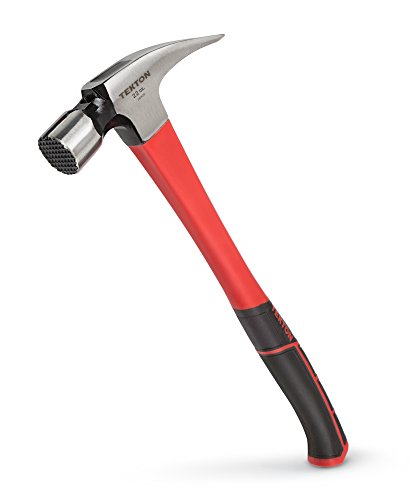 If you’re someone who needs quite a few features at a fantastic price, you’ve come to the right place. The Tekton 30325 provides a number of features including the following:

While it’s not a steel forged one-piece framing hammer, it was put together by an extremely strong epoxy bond that eliminates the possibility of loosening, no matter how many times you use it – or how hard. The high-strength fiberglass composition of the handle ensures that the vibrations transmitted through the motioning won’t screw up the accuracy of your hit or the finished product. If you miss, this outer “jacket” layer protects the hammer like a jacket is supposed to do in real life from the cold. The milled face grips promise a nail-starting slot that’s magnetic so you can always hit it perfectly without missed strikes. If you’re someone who is often faced with the inability to get into nooks and crannies with ease, this hammer will aid you in doing so thanks to the straight claw. 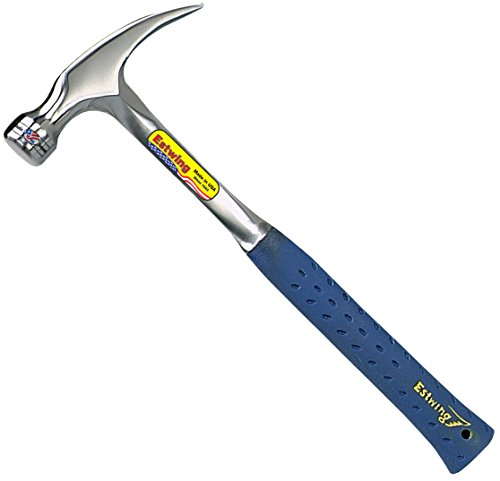 Styled like a traditional hammer, if you’re someone inexperienced, you may believe this isn’t a framing hammer. Features of the sleek Estwing include the following:

The aforementioned framing hammer is pretty straightforward and provides basic features for the average user of this style of hammer. Forged into a one-piece from steel, you’re never going to have to worry about this framing hammer breaking or causing inconsistencies due to the physical composition. The nylon-vinyl grip ensures that you won’t slip during those risky hits, and reduce the possibility of missed strikes due to grip. The fully polished and straight claw are just other features that increase the user’s benefits while using. Along with the previously listed, the 16” smooth face ensures that you can practice basic uses and reduce injury. The cushion grip installed into this framing hammer reduces and eliminates the shock due to absorption of the vibration and hit. Doing so further increases safety for the user while using. Weighing in at 22-ounces, this weight is a major different than other framing hammers and traditional hammers – so be warned! 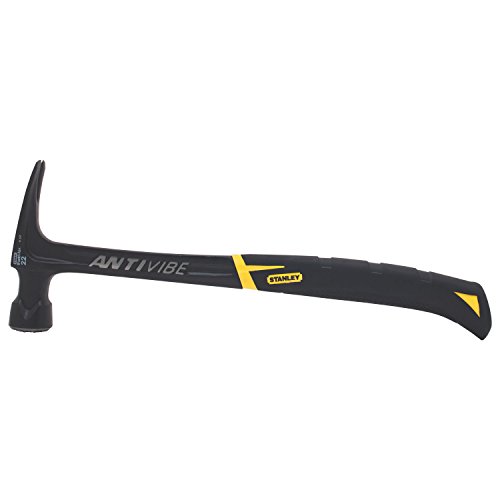 Another 22-ounce hammer, and another Stanley, are much heavier than the aforementioned. By “much”, we mean about 6 ounces. While it doesn’t seem like a lot, in the world of hammering – it is! Features include the following:

If you’re nervous about shock and the weight of 22-ounces, fear no more, as the AntiVIbe technology ensures that the shock is absorbed accordingly. Along with the aforementioned, the torsion technology that’s patented by Stanley ensures that the effects of said torque don’t cause serious harm to the wrists or the elbows. You can even use this one-handed – especially with the magnetic nail start for ease of use! 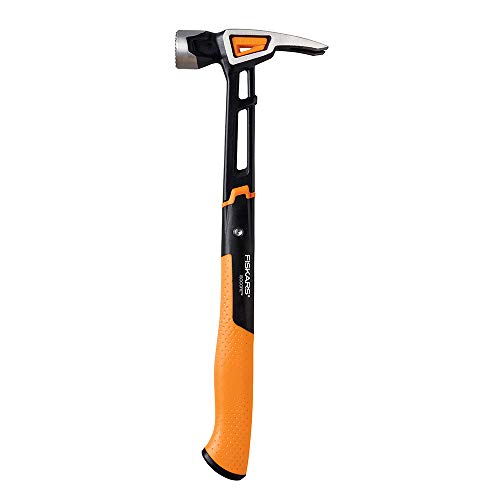 Weighing in the same as our last two, this attractive framing hammer is manufactured by Fiskars, and is pricier than some, but still not a lot of money. Features of this product include:

Because of the weight, the size, and the power emitted from the Fiskars framing hammer, you’re able to perform heavy-duty projects with ease, power, and speed. The milled face is capable of gripping to prevent sliding when you strike down the hammer. The IsoCore patented technology allows said strikes to be absorbed and prevent vibrations from interrupting the user and their body. Lastly, the insulation sleeve further promotes this, absorbing the shock and eliminating the possibility of it reaching your hand or wrist. Those with carpal tunnel will LOVE this!

Last but not least, the Tb15MC model from Stiletto has a number of great features. Simplistic in design, features include the following:

While many hammers are designed more for power rather than the user, the TB15MC model of framing hammer uses technology to ensure a lightweight aspect – starting with the titanium head. These types of heads are typically MUCH lighter than steel, and it proves so in the weight – 15-ounces; a whopping 7 ounces less than a majority of steel-headed framing hammers. Beyond this, the shape and ergonomic aspect of the handle contours the user’s hands perfectly and ensures that wrists won’t be harmed. Beyond this, ease of use is promoted through the magnetic nail start that is provided with this Stiletto framing hammer.

Factors To Consider Before Buying a Framing Hammer

You may be wondering what are the benefits or uses of a framing hammer in general besides what we’ve mentioned. Although framing is one of the primary uses of the aforementioned hammer, it’s also a great tool for removing larger nails, as well as driving them in. If you’re a carpenter who often completes heavy-duty work, you already know that this kind of hammer is definitely something you should invest in.

If you’re looking for something lightweight, you won’t be looking for a framing hammer, as these hammers are meant to provide a solid drive and pull. Due to the weight of the head, these hammers are typically much heavier and have a longer handle to distribute the weight easier during usage. One of the primary features is the aforementioned, allowing more length to handle the power that this hammer is capable of.

Now, let’s compare the framing to the conventional hammer again in a small breakdown:

Let’s quickly get into some tips to take into consideration before purchasing.

If you have small projects at home to complete where you need a hammer, a framing hammer may be overkill. Because of the weight, the length, and the claw, you’re actually not doing yourself any favors by paying more or considering a hammer like this. The purpose of the aforementioned hammer is much different than a conventional hammer.

Those who have hand and wrist issues like carpal tunnel may have issues with the weight and length of the framing hammer, as it’s heavier and takes more strength to drive the nail in successfully. If you’re someone who has an at-home framing project to do, it may be safer to hire a professional or someone else in your family to assist you in this project.

Maybe you’re someone who tackles large projects at home often, or you own your own carpentry business and are in the market for something that promises more longevity. If this is the case, a framing hammer may bid you well, especially if you work with heavier-duty carpentry for your clients. I know some guys who are using air hammer for jobs like this.