I brought home one plant from a home improvement store two years ago, and ever since I have been fighting the constant battle to get rid of the rapidly reproducing fungus gnats. And I’m here to tell you, gnats are annoying. They fly around your face, taunting and daring you to catch or kill them. As an indoor plant lover, the fungus gnat has become the most irritating pest for me to deal with. Though they are harmless to humans, fungus gnats multiply rapidly in indoor plants, killing them in the process.

Houseplants can add color to your home while helping to improve the air quality inside. They can make space feel more comforting. Recent studies have even shown that some houseplants can help you get better sleep. By acting as air purifiers, oxygen producers, and providing lovely scents, house plants help to improve the quality of our lives. Here are a few of the best ways to keep your leafy air purifiers alive and safe from fungus gnat infestations. 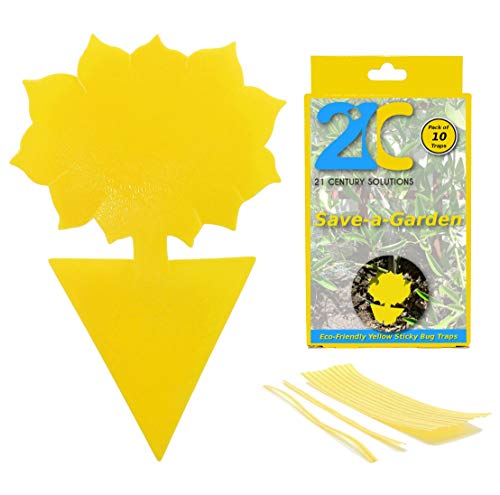 To get rid of a pest, it is best to understand its lifecycle and weaknesses. The fungus gnat is no exception. Fungus gnats are some of the most common houseplant pests. You will most often find them hanging out in wet plants, household drains, and sewer areas. Fungus gnats can be brought into your home from an infected plant bought at a nursery or garden center. Once they infiltrate one plant, they can easily make their home in any nearby plants.

Adult fungus gnats live about one week on average and can lay up to 300 eggs in moist soil, moss, and cracks and crevices on the surface of plants. They prefer to lay their eggs where the fungus is already growing. It takes anywhere between 4-6 days for tiny larvae to emerge and begin feeding on plant roots for about 2 weeks. In the pupal stage, which lasts 3-4 days, young adults leave the soil and begin the next generation. In total, from egg to adult can be completed in as little as 3-4 weeks. As adults lay their eggs and multiply, you begin to have a complete infestation.

Because of their productivity and short gestation period, potted plants become the host for each stage: egg, larvae, pupae, and adult. In a very short amount of time, your pretty little plant can be home to multiple generations at once. Because of this continuous lifecycle, multiple applications of whatever remedy you choose may be required until there are no surviving eggs or adults left.

Adult fungus gnats rarely cause problems for plants, but they can be a nuisance to you in your home. They can enter buildings as flying adults and develop indoors through all of the life cycles. The danger to your plants lies in the young larvae that feed on the fine root hairs of household plants, causing them to droop and develop yellow leaves. The larvae can tunnel into the base of plant stems as well, causing devastation for plants.

This type of damage can be incredibly harmful in greenhouses and nurseries where fungus gnats have the opportunity to harm seedlings, young plants without a fully developed root system, cuttings, and sod farms. Fungus gnats have been found to be responsible for a number of plant fungal diseases including black root rot, verticillium wilt, and Pythium blight.

The best way to get rid of fungus gnats is to avoid introducing them into your houseplants in the first place. Inspect plants prior to purchasing them for signs of fungus gnats. Turn up the soil near the base of the plant and look for glossy, clear/white-looking larvae. Do not buy any plants that have gnats flying from them.

However, the above option may not be available if you already have an infestation. Since fungus gnats have such a quick life cycle, it’s important to reduce their numbers by controlling them both as adults and larvae.  Here are your options for reducing the life cycle of a fungus gnat in your home.

By overwatering, your potting mix remains moist for extended periods of time, which attracts fungus gnats to the steady supply of fungi, algae, and decaying plant matter. If you allow your soil to dry out completely between waterings, this will disrupt the availability of food for the fungus gnats, making the soil in your houseplants less attractive. However, this alone does not always get rid of all gnats.

There are a few physical controls you can use to manage a fungus gnat infestation. For a simple option, make sure that you keep the topsoil of the plant clear of dead plant matter. Clean up any algae that may be accumulating on the top of the soil.

Potting soils containing compost and peat moss are most commonly infested with fungus gnats. If you have a hard time finding soil that doesn’t attract all the gnats and their friends consider, making your own potting soil to prevent incorporating the materials that attract pests.

Sand can help control fungus gnat larvae. By pressing the top of the soil with a ½ inch of sand, it allows the topsoil to drain quickly. This confuses the adults by making them think the soil is dry. I personally love to use Gnat Nix. It is a ground recycled glass product that acts like sand but provides a mixture of granule sizes that confuse and prevent the adult fungus gnats from burrowing to lay eggs.

Yellow sticky traps (similar to fly traps) can be used to trap adult gnats. I have not had the best success with this method. While the sticky traps are effective, I found that they did not help much in reducing the overall population of the fungus gnats in my home. Instead, they just made a disgusting sticky dead gnat mess.

Employ biological controls like nematodes, mites, and rove beetles to help control fungus gnat infestations. While the idea of integrating even more bugs into your home might not be your cup of tea, these types of biological controls help to keep both the population of adults and larvae in check in a non-toxic manner.

Chemicals are always a viable option when it comes to pest control; however, like in the case of Roundup, there are always unknown long-term side effects that can happen. Pyrethrin (a natural insecticide from chrysanthemums) is a contact spray that rapidly penetrates an insect’s nervous system, causing paralysis. This is most effective in killing adult fungus gnats.

Since new adult gnats can emerge daily, it’s important to repeat this spray every few days for a couple of weeks to reduce the overall population. Pyrethrins have a fairly low toxicity level, so they are safe to spray in homes with furry friends.

Vinegar is effective in controlling adult fungus gnats. Put a baby food jar filled halfway with apple cider vinegar and a couple of drops of dish soap. Poke holes in the lid big enough for fungus gnats to enter, and screw it on. Place these jars where you are having problems and they will dive into the vinegar and drown.

Hydrogen peroxide has been one of the more effective treatments I have found for controlling and eliminating larvae populations. Mix one part 3 percent hydrogen peroxide with four parts water. Allow the top layer of the soil to dry, and then water your plants with this solution as you would water normally. The soil will fizz when it comes in contact with the solution for a few minutes after application. The fungus gnat larvae will die in contact with hydrogen peroxide. This can be repeated as often as needed to control the overgrowth of larvae.

Cinnamon powder is a natural fungicide that is effective against damping-off. It helps to control fungus gnats by destroying the fungus they feed on. Sprinkle enough cinnamon to form a visible layer on top of the soil, and repeat this every few weeks as needed. 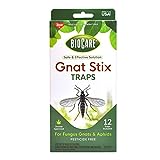 Note the HORIZONTAL orientation of the trap

Potato slices cut into 1-inch round slices, about ¼ inch thick placed next to each other on the surface of your soil will attract fungus gnat larvae. Leave the slices for at least 4 hours before looking at them. Replace the slices every day or two to catch and kill as many larvae as you can.

Fungus gnats are my nemeses. I have spent over 2 years trying and testing every viable option available to me to find what works the best. I have found that it is not one, but multiple solutions coming together that has helped free me from my fungus gnats. Biological agents like mites and organic solutions of hydrogen peroxide have the best effect on larvae control in my plants. I make sure to add a top coat of sand or Gnat Nix to my plants to keep the pests from burrowing.

Houseplants are soothing, and keeping them alive should not be a chore. So no matter what type of pests you end up dealing with, to give your houseplants the best chance of survival, make sure first and foremost that you know the best ways to keep them alive. You can only fight fungus gnats effectively if your plant is still living!

Billie Peacock is an avid skier, yogi, and nature lover. She has spent her adult life advocating for those less fortunate, writing about her feelings and the wondrous world around her.